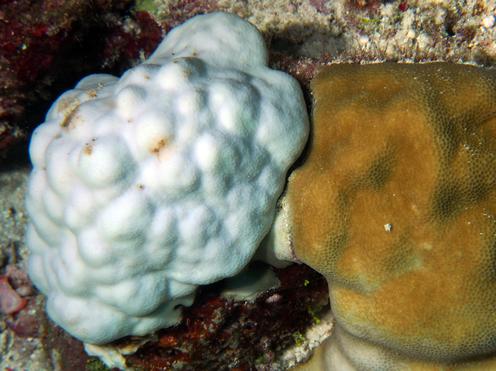 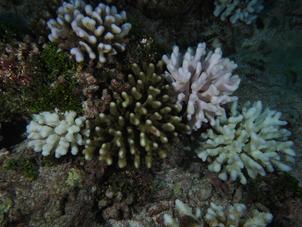 The reefs are bleaching. This looks like a job for....SUPER CORALS

Reef-building corals rely on single-celled plant-like organisms called zooxanthellae (dinoflagellates of the genus Symbiodinium) that they host within their tissue for many of their basic functions necessary for survival.  The relationship is a double-edged sword; corals are sensitive to abrupt temperature changes and the coral-algal mutualism readily disintegrates under prolonged exposure to temperature changes through a process known as bleaching. Since corals rely on the zooxanthellae for nutrition, which is obtained via photosynthesis, coral bleaching can lead to starvation and eventually mortality.

As we have witnessed in the Maldives and in a myriad other locations throughout the Indo-Pacific over the past few months, coral bleaching is becoming more commonplace and threatens reefs on a global scale. In our study areas, we have also found some corals that appear to resist bleaching and it is not uncommon to see a bleached and dying colony next to one that appears perfectly healthy to the naked eye. This coral may have bleached, and then quickly regained pigmentation through the uptake of a new suite of zooxanthellae, or it may never have bleached. In the first scenario, the coral is said to be "resilient" to bleaching, while the second is "resistant".

We do not currently have a good grasp on what makes some corals more tolerant to temperature stress events that ultimately culminate in bleaching in other colonies.  We know that certain species have a higher threshold for bleaching than others, but we also find corals of the same species that show different responses to bleaching.  Uncovering the physiological basis of stress tolerance is a key scientific need that is likely to drive future efforts to seed threatened reefs with resilient corals. There are currently ongoing projects in Hawaii and Australia to breed corals that are resistant to elevated temperature, generating “super corals” as they have been called, but there may be inherent problems with this new generation of genetically modified organisms (GMO) as it is likely to be associated with a decrease in genetic diversity.

Given this significant drawback, Coral Reef CPR is instead targeting resilient corals that already exist in nature as better candidates for re-populating reefs that were are being decimated by coral bleaching. We have already identified a number of corals that have resisted bleaching during the current mass bleaching event in the Maldives.

One of our scientists, Dr Anderson Mayfield is working to understand HOW these corals managed to resist bleaching while neighboring corals of the same species, often within a meter of each other bleached and died. Corals, like all life forms, have a number of means of combatting stress, and this manifests at whole-organism, cellular, and sub-cellular scales. Anderson's work focuses on sub-cellular scales, looking at how multi-cellular organisms restore homeostasis under periods of intense stress exposure. By looking into the cells of the corals and their intracellular dinoflagellates, he is characterizing the genes and proteins that allow a coral to resist bleaching. This will allow us to better target resilient corals and reefs in the future, and will ideally aid our efforts to re-populate reefs ravaged by climate change and bleaching.