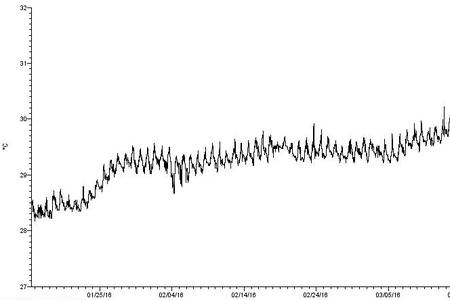 it's getting hot in here.. so it must be time to take off your zooxanthellae!

Within the first few days of our HARP research it really began heating up.  Surface waters reached 32-33˚C and even on the reef, at 8-10 m depth, temperatures climbed over 31.5˚C.  There was no relief at depth – water temperatures were equally high at 30 m and deeper.  The typical thermocline below 20 m depth, usually 2-4˚C cooler had vanished.  Air temperatures were equally hot, without a breeze or a cloud in the sky.  We knew this was unusual when the dress code for the capital city (Malé) was lifted – suits, ties and slacks were taken off and replaced with shorts and t-shirts!

The high temperatures and the concurrent changes to the corals were most noticeable in the lagoon, especially on the tops of the reef and in sites that were very shallow.  The changes on one shallow reef in particular (Veli), were most dramatic.  This reef system has forests of staghorn coral, each colony extending nearly 2m from the bottom to the low tide mark, with thickets that are 10-50 m in diameter surrounding the water villas.

This reef is a favorite snorkel spot for visitors and important nursery area for many marine species.  Besides the fields of stunningly beautiful coral, the reef supports dozens of species of reef fishes, most of which are juveniles that will migrate out to the fore reef once they become adults.

During our first snorkel on this reef (April 7th), most of the corals were still a healthy brown coloration, although a few had begun to turn pale and some were already white.  Within a week, most of the corals had begun to expel their symbiotic algae (zooxanthellae) and many more were fully bleached, except those that were out of direct sunlight.  By the third week of April, it was difficult to find a coral that was not bleached and some of the corals had started to die.

Our temperature measurements were among the most dramatic in this reef. The corals were bathed in water that reached 33˚C during daylight, cooling only to 32˚C in the evening.  We knew the corals could not sustain these high temperatures for long, and began hoping for clouds… and rain.