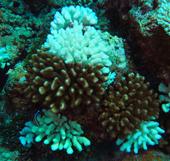 plenty of sun but hoping for rain 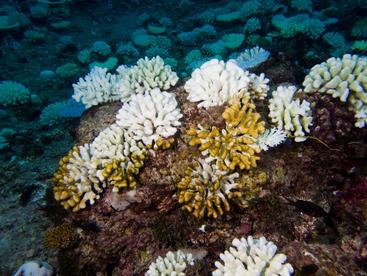 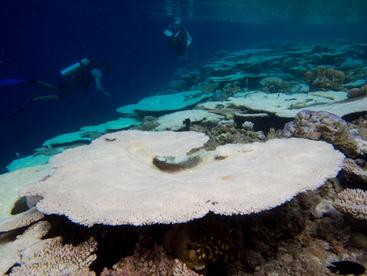 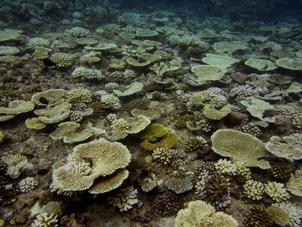 By mid-April, sea surface temperatures in South Malé Atoll, Maldives reached and exceeded 31° C and the warm water extended to 30 m depth and deeper.  The water’s surface was completely flat and transparent much like a sheet of glass, and there wasn’t a breeze or a cloud in the sky.  These conditions had persisted for over three weeks, and no relief was in site.

Each time we returned to one of our sites, bleaching appeared to have worsened.  In shallow water, on the fore reef, it was as if drifting snow had accumulated in small piles, covering only the highest points on the reef (the corals), while the surrounding, low relief (reef substrate) areas were brown, green or pink.

One of the most common branching corals often referred to as cauliflower coral (Pocillopora) was the first to bleach, but other genera followed shortly after, especially species of Acropora (staghorn, finger and table corals), Montipora, and Echinopora.  On some reefs, these corals formed large bushy stands and foliose thickets that were bright white, with only an occasional very light brown on the bases of the branches and plates.

The massive species, such as the pore coral (Porites), as well as the boulder and brain corals (faviid corals), appeared to be less sensitive. Fewer of these were stark white, but they were pale or had begun to change color.  Many had become fluorescent shades of blue, purple, lemon yellow or lime green.

Bleaching was apparent on all reefs, but the overall extent was quite variable.  The shallowest sites, above 5 m depth were hardest hit.  This was especially noticeable in calm lagoonal areas, where the penetration of sunlight was intense and water temperatures were up to 33⁰ C.  Bleaching was observed on the deeper reef, to 30 m depth and deeper, however the deepest corals most often were lighter or vividly fluorescent and fewer were completely white.

Channel reefs (also called a faru) seemed to be the least susceptible to bleaching.  On one reef in particular with very high cover of table acroporids, only a few corals were fully bleached, many were either normal or a lighter brown or green.  We attribute this to the higher amount of water flow.  While there were few waves and currents were minimal in most places, the channel reefs experience daily tidal flow, with exchange of lagoonal water with water from the open ocean.  Besides changes in visibility - these reefs were slightly more turbid during outgoing tides, and this may protect corals by reducing the amount of ultraviolet radiation – water flow may have had a cooling effect on the corals.

Besides the important reef-building corals, other organisms, such as fire coral, leather coral, sea anemones and colonial anemones had also begun to bleach. We were beginning to witness partial mortality in some of the most sensitive corals.  This was most noticeable in cauliflower coral, which had been first to bleach.  Many of the completely white colonies had begun to lose tissue on their branch tips, and denuded skeleton was quickly colonized by fluffy green and golden brown algae.

We had been hoping for rain, the start of the summer monsoon, or some other relief, and had now become quite concerned about the potential impacts of the 2016 bleaching event.  We were on our way to Baa Atoll, to the north, to see if these reefs were bleaching to the same extent. 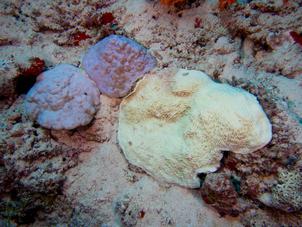 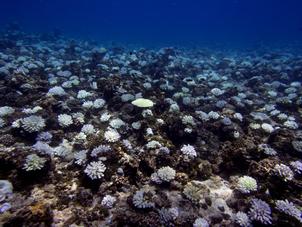