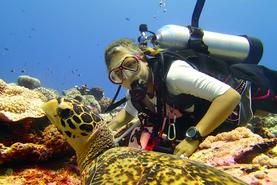 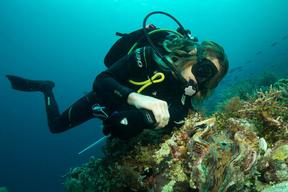 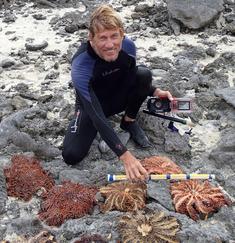 Stefan Andrews is an underwater videographer with an Honours Degree in Marine Science with a passion for science communication and education. As a scientist, Stefan has worked on a diverse range of projects from polar to tropical waters in over twenty countries around the world. His commitment to field ecological research and scientific communication earned Stefan worldwide recognition. For his contributions to the underwater world he was awarded the Ray Hart Memorial Scholarship and The Australasian OWUSS-Rolex Scholarship. As a Rolex Scholar, Stefan trained with leaders of scientific, educational and conservation organizations, developing skills as a scientific diver, underwater videographer and ocean educator. During 2014 and 2015, Stefan conducted reef fish assessments as part of the Global Reef Expedition. As an underwater videographer, Stefan has worked with a number of scientific and conservation organizations to communicate research and promote conservation. Stefan is currently undertaking a Graduate Diploma in Education with the ambition to link his field experience and scientific knowledge to communicate scientific messages and educate through engaging media. His recent short film ‘Plague of Thorns’ documenting an environmental crisis in the Maldives received an award of merit at the IndieFest Awards.

About the coral reef cpr Team 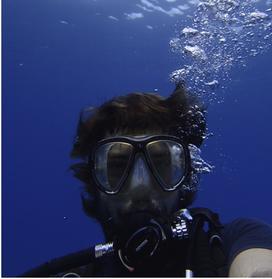 Eric Bornemanis a coral reef ecologist who first became globally renowned in the husbandry of corals. He was the recipient of a National Science Foundation Graduate Research Fellowship where he investigated apoptosis in coral disease at the University of Houston under Gerard Wellington. He was a founding member of SECORE, a multinational group pioneering sexual recruitment in wild corals. Eric also helped found a coral reef conservation and education non-profit, the Reef Stewardship Foundation. He has worked throughout the Caribbean and Pacific, leading or part of research projects on coral monitoring, restoration, reproduction, disease, assessment and climate change throughout the Caribbean, the Indo-Pacific and most recently the Indian Ocean. His findings have been published in journals and at coral reef symposiums around the world.Type your paragraph here.

Andrew Bruckneris a coral reef ecologist with over 25 years experience. He has led coral reef research projects, implemented management, education and conservation initiatives and contributed to policy development worldwide. His work includes the development of sustainable management approaches for the harvest of coral reef species, adoption of international conservation approaches and protection through CITES listings, and listing of corals  on the U.S. Endangered Species Act. Andrew developed and implemented the Global Reef Expedition, a comprehensive five year global-scale assessment of coral reefs in fifteen countries that is providing science-based answers to enhance the conservation of coral reefs. Through the newHARP Program, Andrew is implementing a proactive climate change adaptation strategy involving innovative ecological restoration approaches that include control of pest species and rehabilitation strategies for coral reefs.

Georgia Cowardis a coral reef ecologist from the UK.  She holds a BSc in Marine Zoology and an MSc in Marine Environmental Management. Georgia has worked with various organisations throughout the Indo-Pacific studying marine resource protection and fish communities and with local communities to conserve their reefs. Over the past two years, Georgia has focused her research on characterizing coral reef fish assemblages. She is working to understand the role they play in maintaining healthy reef systems, the changes in fish communities in response to disturbances. She also is interested in the development of strategies that fishers in developing countries can take to sustainably manage their coral reef fisheries. Georgia has been teaching science and reef ecology to a school children communities and visitors around the tropics. Georgia is Andy's research partner and together they have focused their efforts on the protection of reefs in the Maldives. In January 2016 she led a team of HARP scientists to Anantara Resorts, Maldives where they established permanent monitoring sites to track the impacts of the ongoing El Niño event.

Anderson Mayfieldis from Nashville, Tennessee and holds an MSc and PhD from the University of Hawaii, where he focused on the development of molecular biology protocols for use with reef-building corals. He conducted research at the National Museum of Marine Biology and Aquarium in Taiwan to document the physiological response of reef-building corals to global climate change simulations, particularly elevated temperatures and acidity. Anderson’s over-arching research goal is to diagnose coral reef health on a proactive time-scale; in other words, he hopes to be able to ascertain if a coral is stressed before it shows more obvious signs of health decline, such as bleaching or infection. If a reef that appears healthy to the naked eye is shown to be characterized by corals that are manifesting signs of stress at the molecular level, it is possible that management decisions could be made that could help to alleviate local pressures, such as water pollution or over-fishing, such that the corals would have a chance to recover. In the Maldives, Anderson hopes to continue this research by gathering an especially useful sample set: corals collected before, during, and after a bleaching event that occurred in April 2016; such samples could ultimately allow us to understand how and why corals bleach when their environment changes, and the underlying genes and protein candidates emerging from such a project could likewise serve as molecular biomarkers for diagnosis of pre-bleaching stress. 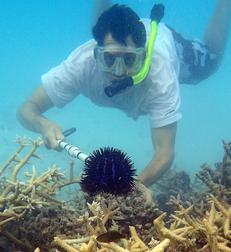