In January, following predictions from NOAA that the second year of the El Niño would be particularly severe and coral reefs were globally threatened by the potential of a mass bleaching event, our team established a number of permanent sites in the Maldives.  Our intent was to assess the severity of bleaching – how many corals bleached, differences among species, differences among habitats and depths, and the amount of coral mortality.  We chose ten sites over two atolls, one that had been impacted by crown of thorns starfish (South Malé Atoll) and one free from these voracious predators (Baa Atoll).  We also chose sites exposed to different environmental conditions.  Some were located on the outside of the atoll in areas exposed to high wave action, some were in channels with strong currents and others were patch reefs located in the middle of the lagoon.  We also selected sites with different types of corals – a few of the sites contained one dominant branching coral, others contained a mix of branching corals, several had mostly boulder corals, and a few were dominated by foliose “lettuce” corals.

We marked each site with rebars – metal stakes inserted into the reef substrate – with two bars marking the beginning and end of each transect.  This would allow us to examine the exact same section of reef, over and over.  We also tagged a lot of corals, to allow us to follow the survival of individual corals over time and to allow us to take small samples, repeatedly, for microscopic examination.  At each site we placed a temperature logger, and have been recording temperature on the reef (at 8 m depth) every 10 minutes for five months now (and for years to come).

We returned at the beginning of April, about a month after temperatures had been above 30⁰ C. On our first few dives, the corals had begun to change from dark browns and greens to light brown.  A few had already turned white and many had become vividly colored.  Often the branch tips of cauliflower coral (Pocillopora) were blue, pink or purple,  the sides and tops of boulder corals (Porites) had become a light blue and some staghorn type corals were a vivid fluorescent blue.  Bleaching was underway, and the temperatures over the next few weeks were likely to seal the coral’s (mis)fortunes.

A scientist pounds in the metal rebar into the substrate 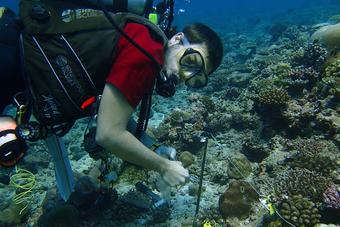 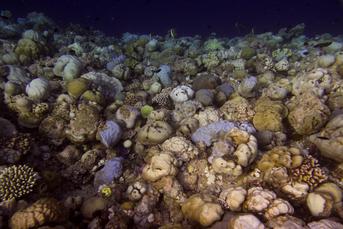